Automatically adding to news on project

Is there a way not only to add to project, but to automatically add to a news post in a project (or flag it as a suggested news post in project) … say using a dedicated observation field?

@SteveMcBill and I were wondering about highlighting regional firsts in UK.

creating a journal post automatically – at least a draft – as part of the input of an observation is an interesting idea, but i don’t think this functionality exists. it doesn’t look like there’s an API endpoint to create journal posts either. so it wouldn’t be possible to create a third-party tool to, say, post to iNaturalist as an observation and as a journal entry at the same time.

what kind of workflow were you envisioning in your use case? who would have the authority to add the observation field? would a project curator need to approve the journal post before it went out to the masses?

But basically, in UK, biological recording is split into “vice-counties” - basically old / static regional boundaries within the country. …so Steve setup a project page for each county.

AFAIK he manages them all atm, so not realistic for him to keep tabs on all at once or manage individual news items I would imagine. Then another pretty standard thing I see in UK recording elsewhere is to flag an observation up on a group if its a “first for county”. So… yes I just wondered about anyone being able to automatically flag finds like this to followers of that county project…it could be either without having to bother him …or just for him to be able to sign off on it with minimal effort.

Maybe there are other use cases for this sort of functionality though.

if you’re primarily interested in “first for county”, then maybe there could be a feature request to optionally bring the Trends (and, specifically, the Discoveries) tab from the Taxa screen to Projects.

here’s a screenshot of what i’m talking about, with Discoveries at the bottom: 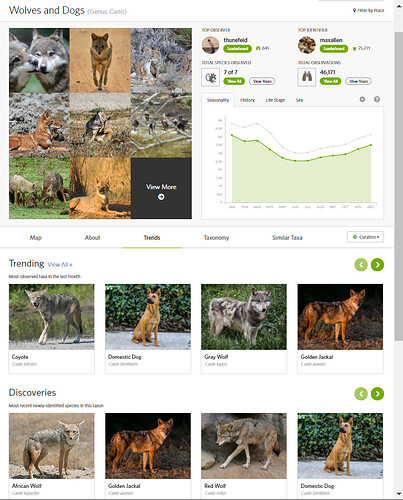 it should be technically feasible, since the discoveries tab data comes from an API endpoint that is not actually restricted by taxon. for example, if you wanted to see recent first identifications of species in VC-59 - South Lancashire, then you could sort of make that out from something like: https://jumear.github.io/stirfry/iNatAPIv1_identifications_recent_taxa.html?place_id=148989&per_page=30 .

Oh nice. Yes, that would be a great solution I think. :)

I’m trying to get this to work for this place, but I seem to be doing something wrong and get two problems. This is the current URL I have set up: https://jumear.github.io/stirfry/iNatAPIv1_identifications_recent_taxa.html?place_id=161113&per_page=30&observation_hrank=species

My intent is to see the latest species that have been added to this area/ID’ed from the area, so that if I were to plug in that URL on any given day, the options at the top of the list are the most recent new species.

Two issues I have:

Also bizarrely, for some observations not all of the same taxa are present as duplicate rows. Eg rows 15-20 as above represent species, genus, tribe, subfamily, family and superfamily. Yet going to rows 1 and 2, and that one only has species and genus listed, and not the other taxonomic levels??

What also doesn’t make sense to me here is that these differing taxonomic levels seem to be completely arbitrarily ordered as well; they’re not ordered taxonomically or alphabetically, or even the order in which that taxon appeared in that area. How do I make only the new species appear in this list without the redundant rows?

this is just the way the API returns the data. i added a column that tells you whether the record taxon is the same as the ID taxon. so typically i’ll pay attention only to the records with true in that column. you could modify the code to just not display the other records, but i left them in because this series of iNatAPIv1 pages that i made are generally supposed to display the results of the API in a more human-readable format, but without doing too much additional data manipulation.

you can see there is clearly another observation of the exact same species located less than 100m away from this one; this other observation was both observed and uploaded way before this newer one, yet the newer one is the one that’s listed in the API request for most recent. What’s going on here?

i’m not sure how to explain this. there are known issues with this particular API endpoint where, for example, there’s a taxon change, the new taxon will show up in these results even though technically it’s not a discovery. but that’s not the case here.

it’s possible there’s a bug here, or maybe it’s intentional. someone else will have to provide more information about this particular case.

all good, thanks for that. Easy enough to just work around those issues, just wanted to check I wasn’t doing anything stupid on my end that I was somehow overlooking