I am still experiencing the problem. I will try to get a hold of ATT. Thanks!

Same problem (only some images visible) with AT&T Fiber in Albany, Georgia (southwest Georgia).
When I switch to Verizon Wireless, all images visible as normal on iPhone and iPad.
Using Safari on a Mac Studio, iPhone 12 and iPad 8th Gen.
The problem began on or about 8/22/2022; nothing had changed on my end.
I have not contacted AT&T yet.

After trying all sorts of things—gateway reset, restart devices, stand on head, let dog operate computer—I thought to check the sources of all images. Those hosted on iNaturalist are fine; those hosted on s3.amazonwebservices are broken.

If I figure out an answer, I’ll let you know. Google fiber just arrived in my neighborhood, so I might fix it that way.

Screenshots of what you are seeing 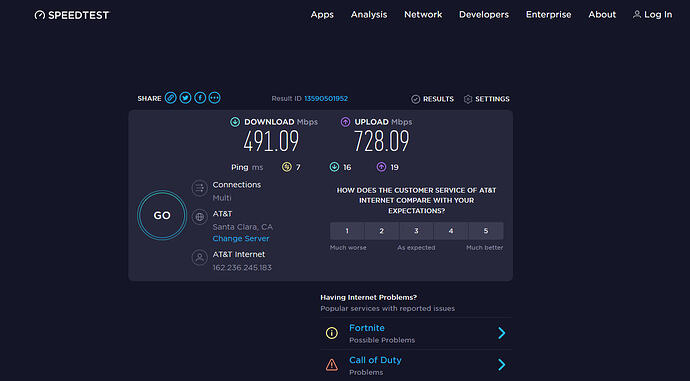 Including URL for latest upload 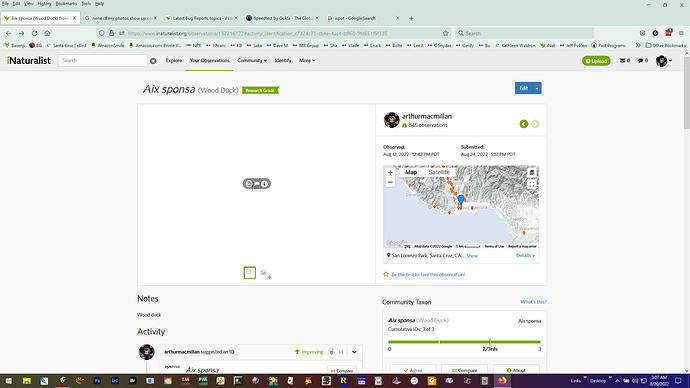 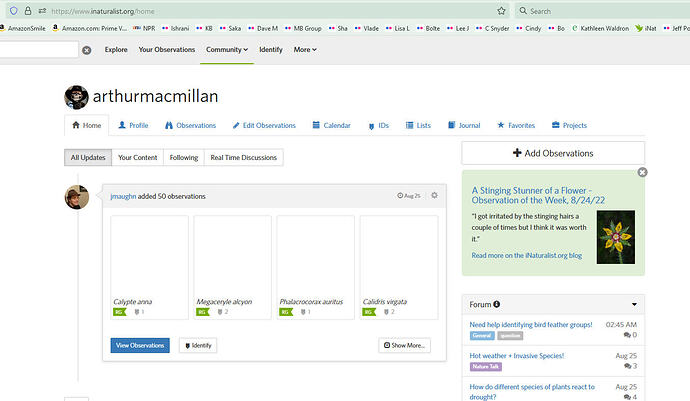 Step 1: Just go to my Dashboard, Observations. You will probably see the photos but (see screenshots) I do not.

Step 2: I read former topic someone submitted:
“https://forum.inaturalist.org › im-getting-no-pics”
which looked like the same problem. At the very end of the thread someone sat that his address seemed to be blocked by iNaturalist and they removed the block. I don’t remember how to see my ISP. I am on my AT&T Fiber optic connection which is fast. At my appartment I have comcast which is also fast. This used to work from here. I don’t remember if I used it at my apartment.

I can still see all my Flickr Photos, and all my Bugguide photos so the problem is limited to this site. I can stilll do YouTube and Netflix for that matter.

Oh! I have firefox’s tracking protection set to STRICT. I guess that could be a problem. I will change it to standard and see if that helps.

Changing to Standard Tracking protection did not help!

Hi Arthur - sorry you’re running into this issue. Looks like this is a known problem with AT&T right now. There are some steps here that may help you: https://forum.inaturalist.org/t/creative-common-licensed-photos-not-loading/34760/15

@bouteloua that link does not delineate the steps, and the interface is anything but intuitive, so screenshots are essential. Here are the steps with screenshots:

Last night, I got to the Exceptions screen this way (no screenshots, because it’s easy to follow, for one thing, and it doesn’t get the job done, for another):

@arthurmacmillan, @roy_cohutta, @tatejack, and anyone else I might have missed, I hope those steps work for you. So far I have been able to see every photo that had been blocked last night.

AT&T: We make the easy impossible.

7 Likes
Pictures upload failing when creating a new observation via web browser
Most of the images that one would compare theirs to are not loading, no matter how long I wait, this has been the case for at least a week. Help!
tiwane August 26, 2022, 6:41pm #26

Thanks for the detailed instructions!

I am here to upload a similar set of images.
This works! 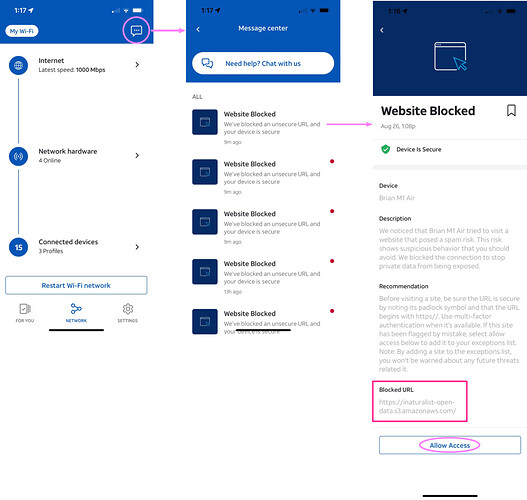 Thank you. iNat is down for maintenance at the moment, but it looks like that fixed the site block by AT&T.

Is it possible that the device you are using has some form of blocker, such as iBoss? I know some of those pre-installed blockers can block photos sometimes. Especially if it’s a school or work-issued device.

@yayemaster, in this case it was device-independent. Our ISP, AT&T, was doing the blocking, and we had to use two specific AT&T apps in a specific sequence of steps to whitelist the website in question. The apps must adjust our gateway settings, because once it was whitelisted from any device it was whitelisted for all devices using my wifi.

Shouldn’t this one be marked as fixed? I gave a thorough explanation of the solution, and bgrhughes provided the short, scroll-free version.

Shouldn’t this one be marked as fixed?

i agree, but that power lies with the original poster, or, alternatively, moderators and staff.

I guess that would be @joseph103 (who might not realize he’s the original poster), @tiwane, or @bouteloua.

I can’t speak for staff’s interpretation of resolved, but ideally it wouldn’t require people to go thru those steps and AT&T would fix it for everyone. I guess it’s not a problem on iNat’s end, but a lot of people are running into the issue and resolving/closing might make it seem like the issue is actually “fixed”.

But this isn’t a bug for either one:

In this thread we have two crystal-clear presentations of the answer—better support than AT&T itself is providing on this topic. Here’s what I think we need to do:

Otherwise, we are liable to get all kinds of new comments offering well-intended advice that is actually just another false lead—and anyone who is still having this problem and doesn’t realize that a solution has been worked out might try following the latest tip rather than dig deep into what must seem to be a pile of other things that didn’t work.

I kept this open mostly as a place for people to discuss the problem, even though yes, it’s technically not a bug on iNat’s end, and also with the hope that someone would report AT&T had fixed it. But I agree that at this point it’s probably not worth keeping open.