Back in May @kueda added counts for identifications and comments to thumbnails on the Identify page. (See also here.)

I’ve noticed that the observer’s own initial ID does not seem to be included the ID counts shown on thumbnails and in other places. Could that be part of what you are seeing?

I found a new wrinkle – an observation that has 4 active IDs, but the icon shows a 2. (I’d link it, but I’m afraid someone will add more IDs and disturb it.) Of the 4 IDs, 1 belongs to the observer, 2 are species level IDs, and the last is a genus level ID. Maybe the genus ID isn’t getting counted here in addition to the observer’s?

Could it be something to do with how CID calculates? No Cid for a single id, so that would explain the jump from 0 to 2 when a disagreeing ID is put as second

As I scroll down the page I see observations that appear to have no confirming ID like this one: 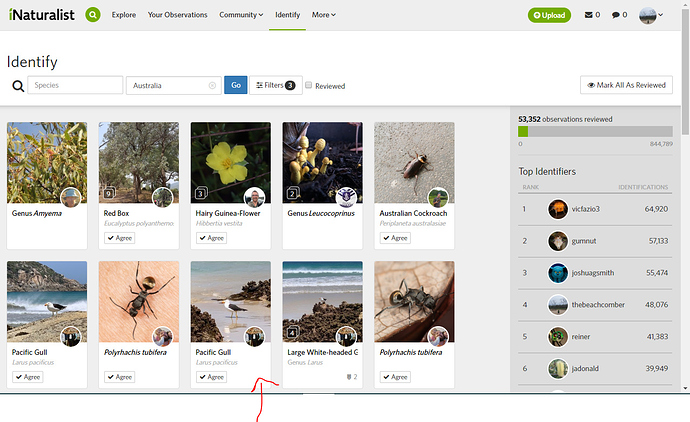 But when I open them up, they actually have been ID’ed, often hours ago: 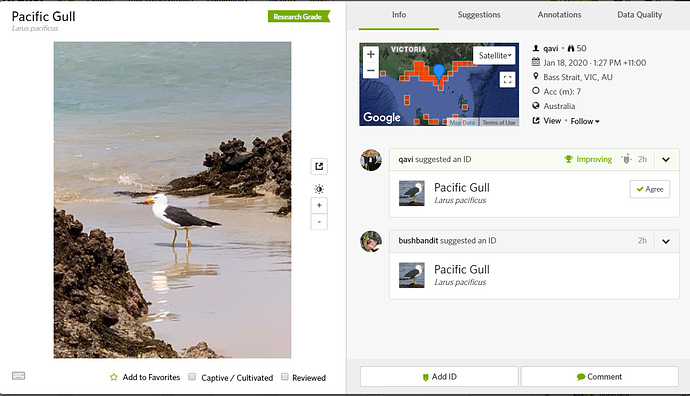 Similarly (and thanks Cassi for changing title), observations with 2 IDs are showing as one, 3 as 2, etc.

I think it doesn’t count the observers own ID.

It never has counted it. It isn’t counting the first ID from the first user other than the observer

sorry, I was going by your description, not the image!

observations with 2 IDs are showing as one, 3 as 2, etc

The example given does indeed have 2 IDs and none counted :)
(sorry, I have had a bad day… should pay more attention)

Also happening on the dashboard now, this one has 4 IDs on top of the initial user’s ID:

I think something changed since I first posted about this, because it seems to be even worse. Back when I first posted, most counts were just off by one – it made it seem like the observer’s own ID wasn’t counting. Which was already weird. But now I’m mostly finding the count to be short by 2 – observations with 4 IDs show 2, with 3 IDs show 1, etc. This isn’t 100% true; I’ve found ones with 5 IDs showing 2, for example. But almost none show the actual number of identifications. 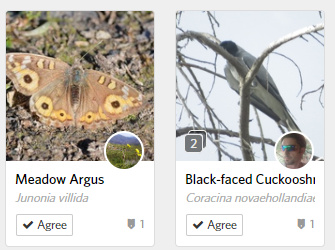 The butterfly is showing the correct thumbnail, as one additional ID beyond the original poster has been made. The bird, however, has 2 additional IDs but is showing one

Just a nudge on this, has anyone figured out what the count is?
@kueda @tiwane @carrieseltzer @bouteloua @jdmore @charlie etc

has anyone figured out what the count is?

Staff had some discussion about this recently and the intention is for that to be the count of active IDs on the obs not created by the observer, but it uses some older code based on counts that may sometimes be inaccurate.

How would you expect it to count identifications?

I think my preference would be to count every active ID, including the observer’s. But I wouldn’t be crushed if the observer’s ID didn’t count as long as the rest of the IDs were counted correctly and consistently.

count every active ID, including the observer’s

Do you think this would ever be confusing in circumstances where there are several active maverick IDs that add to the count, or several more general IDs?

I would also expect it to count every ID, irrespective of the ID type.