App version number, if a mobile app issue (shown under Settings or About): now 1.24.1 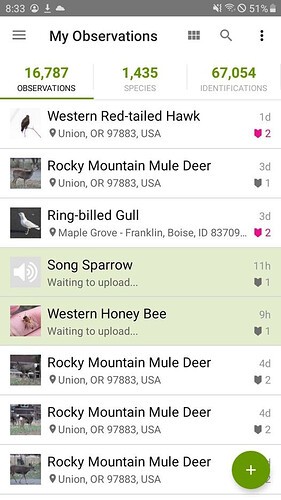 Step 1: Added observation (Western Honey Bee) this morning where there wasn’t wi-fi; since I use an old phone for iNatting, I do not have cell service.

Step 2: Came home and tried to let it sync through my wi-fi, along with a recording (Song Sparrow) I also obtained during the day. Wouldn’t sync.

Step 3: App says it’s syncing but when I go on the website, I see Western Honey Bee with no media.

Step 4: Methods I’ve tried to fix this. 1. Refeshed page. 2. Turn off and on wi-fi. 3. Cleaned cache. 4. Cleaned data. 5. Uninstall and reinstalled iNat. 6. Moved into another room in case it’s a wifi issue.

Step 5: Still stays green and waiting to upload. Wi-fi is not the problem since I added a few observation via my computer and my phone picked it up just fine in my latest refresh of the page.

I have been experiencing the same problem, first noticed a few hours ago. I thought it was related to how my phone updated from Android 10 to 11 yesterday, but I wasn’t able to find any other testimonies that could substantiate that supposition. Besides, I had no trouble with the app after the OS upgrade yesterday. I also have not been able to suggest identifications on other users’ observations. I’m using version 1.24.0 (512).

Same happened to me earlier today. Even while connected to wifi. Ended up deleting the observation and reuploading it via PC.

I have the same problem today, and my phone (Galaxy S9, Android 10) hasn’t updated recently.

This is so common. I barely manage (app version 1.24.0). I just avoid opening any observations, even rotating my device, closing it, opening any other tabs, even fiddling with the process by stopping and resuming.

Once started, it may start to show the green bar on the top “syncing”, “preparing”. But the observation rarely changes from the light green “waiting to upload”. It may occasionally start the process, but immediately go back to waiting without anything else changing.

Once this process happens, you must resubmit the observation from scratch. No other observations successfully submit if this dormant uploading observation is left undeleted.

If all the rules above are followed, observation upload goes slowly, but smoothly. The easiest way is to just leave your device on open, without auto screen sleep, and let it slowly but surely upload. In that time you may upload other observations.

I have the same problem today. Observations photos don’t go up and get occasional message that it’s preparing or uploading but never completes even after an hour or 2. Most unusual for me.
Android updated last night.

same problem: i’m uploading 4 observations from the android app and they are still green after 1 hour. i’ve tried to refresh, clean the phone and change to wifi tto mobile. nothing happened

Investigating further I found the problem is in Android, on Samsung S21plus, TabS7plus, using app or website. Windows 10 laptop works fine on website.
The problem is exactly as described by the 1st entry on this topic.
I hope it’s fixed soon or people won’t be able to submit field observations!

It is happening to me as well. I think it has to do with daytime savings.

If I take a look at my timezone on the website I get that I’m in Spain (Madrid) which is correct but it says that this corresponds to a GMT+1 which is wrong, we are still in GMT+2.

If I upload the obs manually I get the “remains green” but for some reason, if I upload through Seek I am able to upload the single image but with a timezone corresponding to EEST:

I’m guessing it has to do with the certain day of the month in which countries will change their daytime savings time?

My phone has the following date & time (GMT+2):

This is the observation on my phone:

I’m also having this issue since today. I restarted the phone, reinstalled the app, and it wasn’t fixed yet. I can’t upload any new observations.

I’ve been having the exact same problem here since yesterday, I noticed it at 6:30 pm (GMT-7:00) , also with an Android using a Huawei Y8s.

It has been happening to me for almost the entirety of 2021. I’ve just gotten used to it

Since yesterday afternoon I have the same problem. Photos are not uploaded from the app in Android 11

Likely the result of of some new code we deployed yesterday, I apologize. We’re investigating now.

I am having a similar issue with uploads, except the app does not crash. It just stops uploading 25% of the way through the first observation. Same issue on both the current public version and beta 1.24.1. Log files sent.