Taxon 'About' tab: display Wikipedia instead of (wrong) EOL information

Symphytum grandiflorum does not have a German wikipedia entry.

There is a wikipedia entry in English and few other languages, but not in, for example, Dutch.
So, when changing the iNat language to Nederlands, the About-tab displays the information of the corresponding English wikipedia article:

Not so in German.

Instead, here some EOL text is presented: 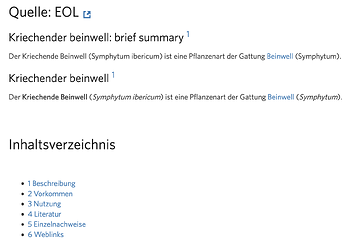 As you can see, the text is about the wrong species.
Clicking on the link after ‘EOL’, however, opens the correct species page.
As can be seen in the history, I tried some things to have the English wikipedia article displayed instead, without success.

My three questions are:

Maybe relevant, although I do not understand why Dutch refers to the English wikipedia and German does not refer to the English wikipedia but to EOL, as in this feature request: https://forum.inaturalist.org/t/use-english-wikipedia-as-taxa-information-fallback-if-no-wikipedia-entry-in-my-non-english-language-exists/17722/2
https://forum.inaturalist.org/t/use-wikidata-to-link-to-appropriate-wikipedia-articles-in-all-languages/5538

That doesn’t really explain why the wrong species name is displayed, but the link to the taxon in EOL is correct. And I am not sure if this is something on iNat’s site or something is wrongly implemented in EOL