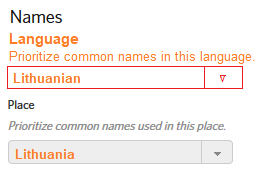 Common name place should only be necessary to assign when there are conflicts between areas that speak the same language but use different names. It shouldn’t be necessary to enter the place in every time, i.e. as is now, for languages the website isn’t translated into, or for people who speak one language but prefer to use common names in a second language.

This is an important setting to further iNat’s mission among an international audience. All language settings should be available online and on the mobile apps.

I 100% support this feature request, but I have reached the limit for my votes.

Unfortunately i do not oversee this feature. It is not possible that there are 152 lists (English, German, Dutch, Danish, Luthian, Estonian, French, Spanish as there are 152 languages) and one just can choose one of those language lists ? ) which you can download for offline use on your mobile ? And than skip the location or you make an separate English-Canadian, English-UK and and English-Australian list.

At least it was not pleasant to have an italian list when i was in italy.

In Germany the Android app does not give german names. But you are talking about the iOS app?

Sorry, I don’t understand the above two responses. When I change my (Android) phone language to German, I see German common names in the iNaturalist app. When I am in Italy, since my phone language is usually in English, my phone displays English (US) names, not Italian names. 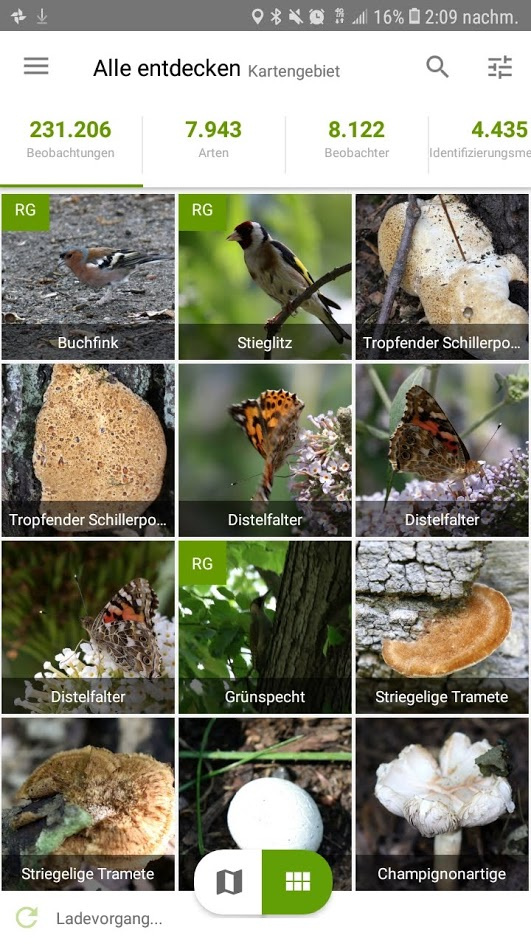 This topic is about adding a feature to select your preferred common name language — separate from the language your phone, computer browser, or iNaturalist website settings.

If you have a question or bug report, please make a separate topic (or continue the one at this link, if relevant). thanks

I agree with this feature request 100%. I’m Finnish, but prefer to use English as system language because it’s jarring to me to have to look at incompletely or machine translated apps. Plant names, however, I definitely want to see in Finnish.

(Even better if I could specify which additional languages to show: for example Finnish, Swedish, English and Latin for each species. But that’s another topic.)

to have to look at incompletely or machine translated apps

As far as I know, there is no machine translation of any kind done on the iNat apps, the translations are entirely done by crowd-sourced human volunteers.

(Even better if I could specify which additional languages to show: for example Finnish, Swedish, English and Latin for each species. But that’s another topic.)

I agree, sometimes i want to select more than 2 languages…and i would prefer a downloaded local regio specific (country, language) species list to improve speed. And due to the length i would split it into groups because fungi and wasps/beetles are so long it would be nice to exlude them)

Any movement on this request?

Why if my Locale is English, is iNaturalist showing me Afrikaans names, when the English names exist?

All our Afrikaans and English (& Zulu, Sotho, and other languages) names were supposed to have been loaded into iNaturalist when we migrated in 2017, but this has been put on hold as the negotiations between SANBI and iNaturatlist proceed. By the time this is done, it looks like a sizeable proportion of names will have been added by users already.

I encountered the same problem when trying to set French common names for Canada, and assume the issue will likely arise in any multi-lingual country at one point or another under the current system.

I’m not sure why, but a species on my observation list does not display the common name in English. Podisus maculiventris is listed with the French common name ( Podise à Ventre Maculé) instead of the English (Spined Soldier Bug).

I cannot add the English name under the taxonomy tab as that name already exists in the database. I cannot force the English name to display in my area (Ontario) as a name is already set. Finally, if I flag the taxon for curation, it teases me by then showing the English name on the page as if nothing was amiss.

Under the “Similar Species” tab, I see Podisus serieventris also wants to display in French.

Any thoughts as to why these species prefer to be known by their French common names?

Ontario is a child of Canada.

The french name was added (along with many others by accident not fully understanding how the names entry works) to be used in Canada.

The user reverted most of them, but must have missed this one.

In general the ‘admin’ pages are not localized which is why the flag page shows English which is the global default name.

Only a curator, or the person who created it may edit a name (this was implemented to stop edit wars on names).

I am a curator, so I fixed it, or at least will have in the next minute or so.

Hello,
absolutely newbie on this site, but long timer on international botanics forums and sites, I use mostly english to communicate (I am French), and only latin names about plants.
Local names are coming after, if there is interest.
For me, as english becomed THE useful international langage, latin belongs THE only one to be sure of what we are really speaking without any mistake.

PS: sorry for my imprecise english…

Any progress or decision on this feature?

an example from Brazil:
https://www.inaturalist.org/flags/510618

Something we’re playing around with, but allowing a user to choose both a common names language and common names place ups the complexity quite a bit.

The first 5 translations of SEEK in Spanish, German, …were machine translated.

This topic is about adding a feature to select your preferred common name language — separate from the language your phone, computer browser, or iNaturalist website settings.

Maybe in the title ‘Select language for common names in apps & website separate from system language’ should fit the Feature request better.

Something we’re playing around with, but allowing a user to choose both a common names language and common names place ups the complexity quite a bit.

So according to this you can already set by language
FYI: (Locale:: Locale sets your language and date formatting preferences.)